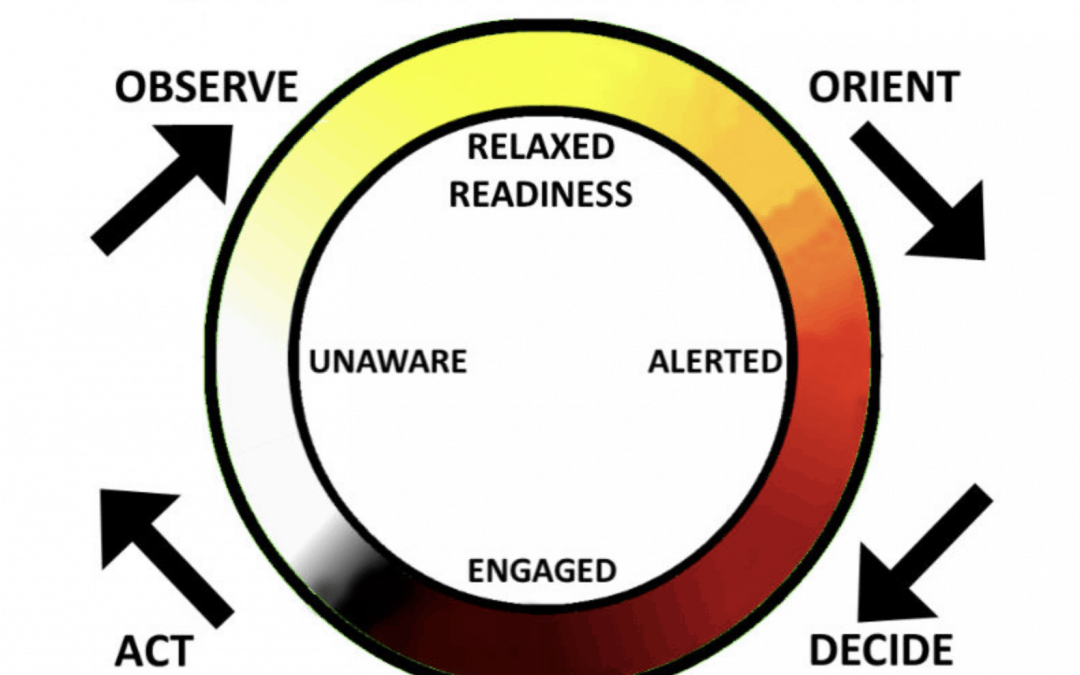 This post will initially describe the origin and different phases of the OODA loop. Then detail the OODA loop in context of potential scenarios and finally, how to disrupt a potential threats OODA Loop

And as the term loop indicates, the process is continual. The OODA model was developed by John Boyd, a military strategist and applied to fighter jet operations. Boyd developed the OODA loop model while serving as a fighter pilot in the Korean war and used it to explain the process for achieving success in air-to-air combat.

The third component involves making the decision hypothesis and, finally, to implement an action. The action then unfolds and interacts with the environment and the process starts all over again. Hence, the term loop.

By understanding quickly what is going on, you can observe the changing situation clearly. You will have to look at yourself and the situation as though you were an outsider and not from your own point of view. All senses are used at this stage, as a result of which as much information can be collected as practically possible.

At this stage you will know what has to be done. This does not only concern position, but also the possible options you can visualize. John Boyd distinguishes the following factors that play an important role in this stage including genetic inheritance, cultural traditions, past experiences, analysis and new information. Orientation does not only indicate how you see the world, but also what kind of world you are capable of seeing. The orientation stage is described as the most important process in the OODA Loop. The information from step 1 is organised.

This stage is about learning from experiences. Based on someone’s current mental perspective, they make decisions and determine what actions they need to take. The right decision is taken and actions follow from this.

The physical execution of the decision is a fact at this stage. The selected approach is actually carried out. Experiences and/ or consequences of the approach are forwarded to the first stage, observe, after which the loop is complete and the cycle starts over again. It is a very quick process. The objective is that a potential opponent does not get the chance to complete the loop as well, so that the opponent is always keeps running behind the facts. The combination of observation and orientation leads to a decision which in turn leads to action. And then the cycle starts over again. It is a continuous process in which you should always be on the alert in a changing environment.

The OODA loop in context of a developing confrontation

A threat can start out being only potential—it has the capacity to develop into an undesired event in the future. The progression from potential threat to an active threat is best illustrated by the classic example of a street thief.

The same thief, standing on a street running his OODA Loop, observes his immediate environment and thinks to himself, “Some easy pickings here.” He then orients to his environment thinking to himself, “I can rob some victims here and make some cash.” At this point, he remains only a potential threat. It’s only when he moves to the next step in his OODA Loop that things change.

When the thief arrives at his decision “I’m gonna rob someone,” he crosses that line of demarcation and converts from being a potential threat to an active threat.

Unfortunately, this internal decision-making process is not outwardly observable by anyone other than the thief until he completes his OODA Loop and acts on his decision. The thief now exhibiting observable attack-related behaviour, serves as a confirmation of his status as an active threat.

Motivated by his decision and capable of carrying out his plan, the thief, completing this last step of his OODA Loop, exhibits pre-attack behaviour by looking around the area for suitable prey. He then selects his victim and moves toward him, points his weapon at him and, raising his voice, starts shouting, “Give me your F**king phone now” All of this pre-attack behaviour is observable. The last step of his OODA Loop, ( If the victim refuses to hand over the phone) the physical strike or use of weapon.

To the untrained eye, the entire incident appeared to be a single snapshot of a street crime. But, to the trained observer, it was a clear illustration of the OODA Loop running from beginning to end of the cycle.

How can we use the mechanics of this same cycle to stop a threat? The key to victory is to get inside your adversary’s loop.

A fresh OODA Loop is run at the immediate end of the previous cycle. In practical application of this concept, you are driving along the motorway and observe another vehicle occasionally swerving in and out of its lane. You orient to your distance, speed and position relative to the threat and decide to pass this vehicle. You act on your decision by applying pressure to the gas pedal.

However, just as your acting on your decision and are in the acceleration process, you observe that same driver also accelerates, you orient to the situation in that he’s matching your speed, so you decide to slow down, and act on your decision by relieving pressure on the accelerator allowing him to pass in front of you. You ran two OODA Loops immediately, back to back, with the entire incident taking place in less than 2 seconds.

Reaction time plays a factor in how quickly an OODA Loop is run. The average amount of time it takes for a human being to mentally react to a stimulus, is approximately .25 seconds. Everyone’s reaction time is different, and the speed at which you run your loop is impacted by this factor. However, just knowing what the OODA Loop is and how it works increases your familiarity with the process, which decreases your response time.

The repeated cycle is a continual stream of running through all four steps of each individual cycle per person. In other words, while you’re running your OODA Loop, the bad guy is running his—the physics of this equation is that only one of you acts while the other reacts to that action.

You arrive at your destination by taxi from the airport and are unloading your bags from the taxi when you look up and notice two individuals posted across the street, observing you handling your luggage. When they observe you watching them, they cease their surveillance and walk away. The entire incident took place inside of a second, but from a third-party perspective what really happened was a disruption of the threats OODA Loop.

The predators—who you couldn’t initially see because you were in the taxi—were running their OODA Loop. As criminal opportunists, they observed that it was a busy hotel and oriented to the fact that many people leave their bags unattended while their attention is focused elsewhere, then they decided that this would be a great location to position themselves and ply their nefarious craft. In acting out their decision, they set up and started scanning for potential victims.

In rolled your taxi. Your adversaries immediately started their next loop and observed you getting out of your taxi. They then oriented to the scenario that you were focused on talking with the driver while placing your luggage on the ground next to you. They decided you were a valid target and acted on that decision by monitoring your actions while moving toward you.

Stepping out of the taxi , you, observing that you were in a dangerous location, oriented to the fact that you may be a potential target, so you decided to practice good situational awareness and acted on that decision by looking up, only to see them looking directly at you. Catching them in the act by running your OODA Loop, you cut inside their loop, taking control of the incident by effectively disrupting the action-reaction power curve. Now, you put yourself in control of the situation as they scurried off to look for softer targets.

When you got inside their loop, you forced them to run a fresh loop, and in doing so they must re-observe, re-orient, re-decide and re-act to the actions of your current loop. By disrupting adversary, you gave them no other choice but to react to your actions, giving you full control of the action-reaction power curve.

The terrorist, predator or opportunist carrying out any planned attack such as a mugging, kidnapping, etc., has no other option but to follow the preordained cycles of the OODA Loop to ensure their success. Your knowledge of the OODA Loop, how it works and how you can use it to get inside their loop forcing a reversal, is what enables you to control the threat as opposed to the threat controlling you.

The OODA Loop in context of self defence training

For self defence techniques to work under stress they must be based on your natural, instinctive reactions, and be tested in fighting scenarios such as sparring, stress drill fighting, multiple attack fighter training.

Weapons training must be part of the training. Understanding how weapons can be used and having the mindset and ability to neutralise the attacker is essential.

Having a tenacious mindset when faced with a potential threat is more important for self-defence than being physically fit and technically skilled.

At Guardian Defence our training encompasses all of the above.