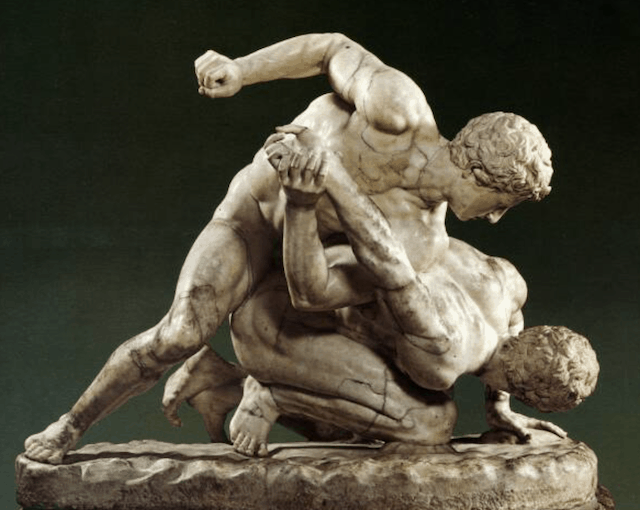 Guardian Defence training curriculum includes ground fighting. We train in context of street self defence. This post will outline how our curriculum was developed.

The movements of Aikido emphasise a flowing flexibility and the maintaining of balance. The aim of the aikidoka is to be in complete control of his or her mind and body, and to maintain a calm, alert posture. The continuous and flexible motion, which originates at the waist, is like the performance of a dance, a graceful spherical motion. Much of the beauty of the Aikido movements derive from the coordinated motion of the entire body contributing to the integrated sequence of movements.

The first real traces of the development of wrestling date back to the times of the Sumerians, 5000 years ago. The Epic of Gilgamesh written in cuneiform, the sculptures and the low reliefs, are numerous sources that reveal the first refereed competitions, accompanied by music. There are also many historical and archaeological traces of wrestling in Ancient Egypt. Among them, it is worth mentioning in particular the drawings discovered in the tombs of Beni-Hassan representing 400 couples of wrestlers. These drawings, as well as many other vestiges, witness the existence of corporations of wrestlers in Ancient Egypt, wrestling rules and refereeing codes.

For the Greeks, wrestling was a science and a divine art, and it represented the most important training for young men. Athletes wrestled naked, with their bodies coated with olive oil and covered with a layer of very thin sand to protect the skin from sunlight or from cold during winter. After wrestling, they scraped this layer off with an instrument called strigil and washed themselves with water. Fights were similar to those of freestyle wrestling, as shown by drawings and inscriptions from that time. The competitor who first threw his opponent or first brought him down – either on his back, hips, chest, knees or elbows – was proclaimed the winner.

During the Ancient Olympic Games, from 708 B.C., wrestling was the decisive discipline of the Pentathlon. In fact, it was the last discipline to be held – after the discus, the javelin, the long jump and the foot race – and it designated the winner of the Pentathlon, the only crowned athlete of the Games. The most famous of all wrestlers was Milon of Croton (student of the philosopher Pythagoras), six times Olympic champion (from 540 to 516 B.C.), ten times winner of the Isthmic Games, nine times winner of the Nemean Games, and five time winner of the Pythic Games. Legend has it that when he tried to splinter a tree with his own hands, his fingers got stuck in the split tree-trunk and he was devoured by a lion.

Escape when pinned down on the ground

Mixed martial arts (MMA) competition, which also has been referred to as a no-holds-barred form of sport fighting, extreme fighting, and cage fighting, has its roots in 648 BC, when pankration was featured at the 33rd Olympiad Pankration, a Greek word meaning ‘all-powerful’, was the hybridization of boxing and wrestling styles transformed into freestyle fighting. Like its ancient predecessor, contemporary MMA has come to attract a great deal of attention for its sheer violence. Since the introduction of the sport, athletes have entered a cage (the octagon) with an opponent and there unleashed a series of punches, kicks, elbow strikes, grappling techniques and body throws to defeat their counterpart. The combination of elements from different martial arts, geographically and historically disparate, makes contemporary MMA a sort of an embodiment of globalised sport and physical culture.

Kicking attacker when on the ground

Escaping from someone who is in dominant position on the ground

Getting up from the ground

Parkour, or l’art du de placement (the art of movement), is widely recognised as an urban-based activity that at its simplest is the art of moving through and around obstacles, the aim being to get from A to B with speed and efficiency. Whilst constituted by a number of individual techniques and moves, the ultimate goal is to weave these components together to achieve a ‘flow path’ through the built environment. Using acute spatial awareness and physical strength, master practitioners create an aesthetic, yet entirely functional, performance.

How to escape/evade an attacker

All of Guardian Defence our defensive moves have been adapted to cause maximum damage to an attacker.

Guardian Defence Curriculum objectives are to escape an attacker whose sole purpose is to annihilate his victims.

At Guardian Defence no one is a victim.

The person who for whatever reason has embarked upon the path of violence becomes the victim.