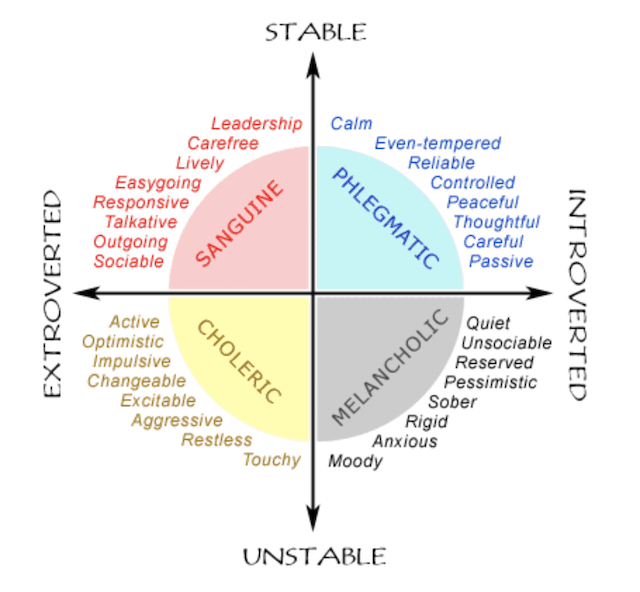 The study of the four temperaments goes back to the time of the Greek Physician Hippocrates who theorised that personality traits and human behaviours are based on four separate temperaments associated with four fluids of the body: choleric temperament (yellow bile from the liver), melancholic temperament (black bile from the kidneys), sanguine temperament (red blood from the heart), and phlegmatic temperament (white phlegm from the lungs)the dispositions people have are related to imbalance of liquids in the body. Modern science has disproved this theory.

The purpose of this article is to help us understand ourselves Better.

Gaining a greater insight into ourselves can help us to discover if we have what it takes to effectively deal with a demanding situation such as a violent encounter.

Some people find it easier than others to work out what temperaments fit them best, often because of the temperaments that they are!

This article will hopefully make it easier to decide which temperaments you probably are.

As has already been established, the temperaments don’t determine your personality wholly. They only describe the basic foundation, the ‘skeleton’ of your attitude towards others.

It’s entirely possible to put on ‘acted’ behaviour, either through upbringing or through conscious choice. These behaviours will ‘mask’ a person’s basic temperaments, but they’ll always feel ‘put on’ or ‘fake’ to the person using them. Like they’re how they ‘should’ behave rather than how they ‘naturally are’.

If you ever feel that you have to ‘control yourself’ in any of your behaviour, look to the part that is being controlled, rather than the bit doing the controlling, to work out your temperaments.

Beliefs and temperaments are not the same thing. For example, most sensible people will have empathy for others and will feel distress when they see them harmed. This doesn’t make you part phlegmatic, however, as the *reasons* behind it are different.

You shouldn’t dissect temperaments trait by trait, wondering whether every single one fits you in every way!

The temperaments should be seen as wholes, not as lists of properties or traits that need to be completely matched to get a fit.

Most people will find that they fit ‘most’ of the traits listed on the pages of one or two of the temperaments, as well as ‘some’ traits from the other two.

Some people might actually only fit a few *traits* for a specific temperament, but the whole ‘big picture’ that the traits describe fits them better than the other temperaments.

Does one of the four temperaments really ‘speak to you’, really seem to describe you quite well? If so, it’s probably your Primary.

If another seems to fit you better than the others, too, then that’s probably your Secondary. Many people will be able to choose their blend this way.

However, some people find that none of the four temperaments stand out to them at all; they can see traits from all of them that they match, and feel that none or all of them are applicable.

These people are usually of opposing blends.

Choleric and phlegmatic are ‘in opposition’, as are melancholic and sanguine.

People of the choleric/phlegmatic, phlegmatic/choleric, melancholic/sanguine, and sanguine/melancholic blends tend to feel more well-rounded than people of other blends, and find it significantly harder to decide on what to choose.

This is because they have traits from two extremes, which even out to make a complicated personality that’s hard to clearly define.

If you find yourself in this position, you should first think whether or not you’re particularly emotional.

Phlegmatic and choleric are unemotional temperaments, so the blends of the two are the least emotional of all blends. If you’re not emotional, you may be one of those.

Melancholic and sanguine are very emotional indeed though, so if you are emotional, you’re probably one of those blends.

Then, wonder whether you’re an extrovert or an introvert. Do you prefer to keep to yourself, or to be around others?

If you prefer to be alone, maybe you’re phlegmatic/choleric or melancholic/sanguine.